The Perth Basin extends south from the Southern Carnarvon Basin and covers an area of about 100,000 km2, from the Yilgarn Craton in the east to the edge of the continental shelf in the west. The onshore area is readily accessible, consisting of farming and shrub land in the central region. The undulating northern portion of the basin has relatively simple access from main roads. In the south, forestry and grazing are the main land uses. 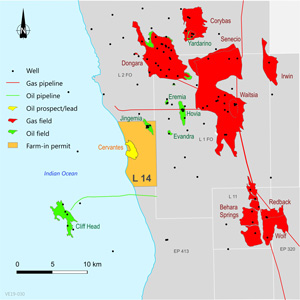 The stratigraphy and petroleum system elements of the Perth Basin developed during the tectonic evolution of the basin and vary significantly from north to south. Initial rifting established a series of Permian to Early Triassic depocentres for fluvial and marine siliciclastics with minor carbonates and coals in the north, while in the south fluvial siliciclastics and coals dominated. These Permian- and Early Triassic-age rift-sag deposits are associated with the major petroleum system in the north Perth Basin, particularly the Kockatea Shale which forms an important oil source rock and regional seal to underlying reservoirs.

A second phase of rifting in the Late Triassic and Early Jurassic was associated with widespread fluvial and deltaic deposits, including a thick succession of siliciclastics and coals (Cattamarra Coal Measures), which are overlain by Middle Jurassic marine shales (Cadda Formation) in the north Perth Basin. These Early to Middle Jurassic strata form a second proven petroleum system in the north Perth Basin. The final rift and breakup phase in the Middle Jurassic to Early Cretaceous was associated with deposition of fluvial and marine siliciclastics (Yarragadee Formation, Parmelia Group and Warnbro Group), which form the main petroleum system in the Vlaming Sub-basin.

The Cervantes Joint Venture has retained Aztech Well Construction Pty Ltd (“Aztech”) to design and manage the drilling of the Cervantes-1 exploration well.  Aztech has a wealth of experience in the north Perth Basin, including managing the recent successful Beharra Springs Deep exploration well.  Aztech conducted the initial scoping of the well-plan and has started the well design and planning, including identification and sourcing of long lead items and has requested expressions of interest from drilling companies.

All environmental surveys have been conducted and final project environmental approvals are anticipated by the end of the 2020, which will allow for drilling in Q3 FY21.

Vintage executed a farm-out agreement with Metgasco (30%) and RCMA Australia Pty Ltd (“Jade”, 40% and free carry) for 30% of the Cervantes oil prospect. The joint venture is targeting to spud a well in 2021 and has an option to drill a second well into a separate prospect.  The Cervantes prospect sits within L14, a 39.8 km2 Perth Basin production licence granted over the Jingemia oil field and surrounds.  The licence is in good standing and not due to expire until June 2025. To earn 30%, Vintage will pay for 50% of the cost of the well, and $200k of evaluation and exploration.

The proposed Cervantes-1 well is expected to cost $3.7 million (net), with any well costs above a cap of $8 million (gross) reverting to Vintage’s joint venture equity level of 30%.

The Cervantes structure is located on an oil discovery trend, comprised of the Hovea, Jingemia and Cliff Head oil fields.  These fields, in total, have produced in excess of 27 MMbbl of oil from Permian reservoirs in the Perth Basin and lie within an oil fairway around the western and northern section of the basin.  The Cervantes structure is a high-side fault trap with multiple Permian reservoir units, sharing strong similarities with the offset oil fields in terms of structure, potential reservoirs, and access to a mature oil source rock. 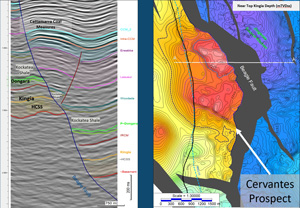 Seismic traverse across the Cervantes structure and Kingia Depth Map

The Permian reservoir targets in the prospect are the prolific Dongara, Kingia and High Cliff Sandstones which are expected to yield a combined gross 2U Best Estimate of 15.3 MMbbl (4.6 MMbbl net to Vintage) of oil. Cervantes has a chance of success of 28% and a high chance of development due to its proximity to infrastructure and existing oil and gas fields. The opportunity for rapid conversion of prospective resources to producing reserves exists via a 3rd party oil processing and operations agreement with L14 operator Jade, which owns and operates the nearby Jingemia oil processing and export facility.

1 Volumetrics sourced from Metgasco. 2. The estimate quantities of petroleum that may potentially be recovered by the application of a future development project(s) relate to undiscovered accumulations. 3. These estimates have both an associated risk of discovery and a risk of development. 4. These prospective resources are estimated as of 10 September 2019 and first reported to the ASX on 15 November 2019. 5. Further exploration, appraisal and evaluation is required to determine the existence of a significant quantity of potentially moveable hydrocarbons. 6. The resources have been classified and estimated in accordance with the Petroleum Resource Management System (PRMS). 7. The prospective resources have been estimated based on the interpretation of 3D seismic integrated with offset well data. 8. Probabilistic methods have been used to estimate the prospective resource in individual reservoirs and the reservoirs have been summed arithmetically. 9. Vintage is not aware of any new data or information that materially affects the estimate above and that all material assumptions and technical parameters continue to apply and have not materially changed. 10. It is expected that the prospect will be drilled in Q1 FY21 and that no further material exploration activities, including studies, further data acquisition and evaluation work are to be undertaken prior to that activity. 11. Resource estimates are net of shrinkage.

Vintage Energy Ltd has been established to acquire, explore and develop energy assets principally within, but not limited to, Australia, to take advantage of a generally favourable energy pricing outlook.